“How much money do you have?” Maxwell asks. He’s stooped in the driver’s seat of his Chrysler Saratoga, ham hock hands resting on the steering wheel like fat, hairless rats. If he were anymore overweight he’d be wearing the car like a Transformers Halloween costume and I’d be walking to the 7th Street Pump and Go.

“Five dollars.” I really have ten but why should I tell him that? We (June, Pen, Grace and I) are his guests, and he’s been a terrible host, leaving us to wash our own cups and me to run to the store now that the Sprite has given out.

“We can get a couple of two liters with that.” Maxwell nods.

He turns the stirring wheel left and the tangerine junker rolls onto 11th St. Over the hood and along the windshield drops of a late summer rain, made orange by the passing sodium-vapor streetlamps, drift up and away. The early Greenville evening passes my window, a soundless tribute to a bygone American age. Morton Furniture Manufacturing (defunct), Greene Hosiery (defunct), The Chicken Basket (alive and packed full of low income, obese patrons.) 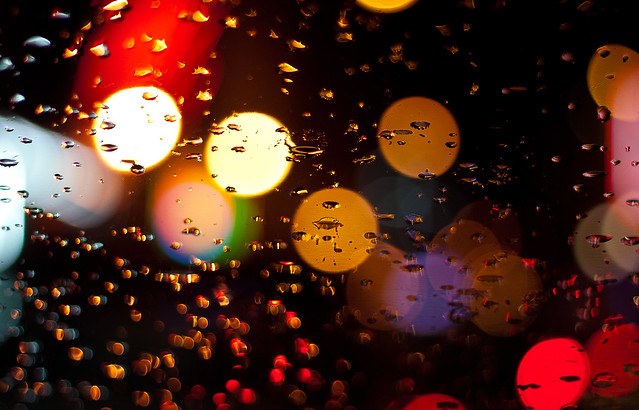 I don’t care what the mayor says,  Greenville can be beautiful at night.

I want to ask if we can listen to some music but from the looks of the gaping radio shaped hole in his dashboard, that’s out of the question. I turn back to Magic. “Grace is pretty good with the blue color huh?”

Maxwell grunts something and lights a cigarette with the dash’s push button lighter. He cracks his window just enough to keep me from suffocating. “Brian sucks at whatever he plays. Little Miss Priss really isn’t that good.”

“So nothing.” I know it irks him that Grace is actually good, real good, and probably would’ve won all six games but it took her a little while to get use to what Pen calls the synergy of her deck, the way the cards play together, drawing on each other’s strengths and compensate for each other’s weaknesses. Like a hockey team, Pen said, though I doubt she’s ever worn a pair of ice skates in her life. After three hours in Maxwell’s dilapidate duplex (we could hear his neighbors arguing through it’s paper thin walls, something about a full litter box) Grace has proven herself a kick a** player.

“What color do you play?” I push the conversation in another direction, preferring it to the near silence of Maxwell’s heavy smoking. Pen tried to explain the differences in the colors but it was lost on me. She might as well have been describing the inner workings of the CIA.

“It’s called ‘mana’, and I play red.” Maxwell says. He turns to avoid a pothole, careful to keep Bitch (that’s what he’s named this four wheeled heap) from any unnecessary wear and tear. He says that if I actually knew what kept her together I’d have a conniption fit, whatever that is.

“Because it’s quick and there’re aren’t many tricks.” He drops the cigarette butt out the window and lights another, a Pall Mall, what Dad calls the poor man’s brand. “You hit fast and hard and if you haven’t won by your fifth or sixth turn, you run out of gas and loose. Simple.”

We pull up to the Pump and Go, and I hand him one five dollar bill, careful to hide the other from view. He struggles out and lurches towards the store. I can see his mother, exhausted from working a double shift, talking to him over the counter. He points to me and she looks. I wave. She waves back, the fat under her arm wobbling

Earlier on the drive to Maxwell’s, Pen tried to prepare us. She said it’d be like going to the dentist. Besides the initial needle prick of Novocain you really don’t feel anything you just think you do. The only real worry is the possibility of a bad aftertaste. She can be poetic like that, working metaphors like Grandma Mimi knits ugly sweaters. June, of course, says she’s full of it. She’s spent the afternoon watching YouTube on Grace’s phone, eating up gigs of data like Oreos.

Maxwell opens the driver door and hands me a two-liter of Sprite before easing himself back into his seat. Bitch groans under his weight and sinks to one side. He cranks the engine and turns down 7th St. “We’ll take the long way back. I need a few more cigarettes.” After a few minutes 7th St. become Folsom Ave., then 22nd St.

Normally, I wouldn’t ride around with someone I hardly know, let alone handing said stranger money, but again Pen was right. Maxwell and Brian are about as harmless as Caesar salads and the term stranger danger doesn’t really apply to them. Chad may have been a problem, but his new job at the B St. Dollar General keeps him out most weeknights. Grace wouldn’t have come otherwise. That and the promise of no alcohol. Caffeinated sugar water seems to be her poison of choice.

“How’s Chad’s new job?” I breath through my mouth, never being able to stand the smell of cigarette smoke, not even Paw Paw’s, and he smoked like a chimney, “Does he like it?”

“He stocks tampons all night, how do you think he likes it?”

“I suppose he doesn’t.” I say, wondering what it would be like to stock condoms all night, “He probably hates it.”

“Bingo. And the fat redhead gets the prize.” He offers me a cigarette.

“No thanks, I like living.” Mom would be proud.

“You know,” Maxwell, now with two death sticks hanging from his dry lips instead of just one, pushes in the dashboard lighter, “he was pissed about us planning Magic without him. He wants Little Miss Priss pretty bad.”

“He really likes her.”

He shakes his head. “I told you he just needs an anti-Mrs. Mumford. But Grace will do. The fact that she’s cute is just a plus.” He grins, “That boy would give a silver dollar just to sniff her twat.”

“Ugh…” Oh God that’s disgusting! And what’s this crap with a silver dollar?  Sounds like something Paw Paw would’ve said, if Paw Paw was a pervert or something, and he wasn’t.

“What about you?” I’m attempting to pull the conversation out of the cesspool and onto dry land, “Do you like anyone?”

Maxwell looks at me, a who the h*** are you? expression on his fat bovine face, then turns back at the road.

He sighs and says without turning, “Big tits.”

No surprise there, every boy likes big boobs. It would’ve been nice to hear something about a shining sense of humor or a strong maternal instinct. “Is that all?”

We turn down one avenue then another, and Maxwell’s few cigarettes turn into a half-dozen. He clears his throat. “A girl has got to have big tits. That’s a must. Like icing on a cake. Otherwise it’d  just be bread.” He snorts, “If it weren’t for her hair Little Miss Priss would look like a boy scout! No boobs at all!“

“I mean just about every girl has boobs: you, June. Man if June’s boobs were any bigger she’d be a Boobasaurus Rex!” He snorts hard and loud. If we were in a school lunchroom chocolate milk would be shooting out of his nose, but instead cigarette ash flutters down his chin and  onto his lap. “Even Pen has boobs. Cute perky ones. Nice pink nipples too.” He catches my look. “What?”

“Nothing.” But there is something.

“We were drinking one night, watching TV, and she started making out with Brian.” Maxwell lights another Pall Mall as effortlessly as turning the page of a book. “Well, he gets up and to take a piss. While he’s gone she turns and starts making out with me. She tasted like Maker’s Mark if you want to know.” He pauses, letting the images sink in. My stomach turns. “A few minutes later Brian came back and caught me with her left titty in my hand. The boy was pissed. He f***ed up my drum set, kicked the s*** out of it. Told us to f*** off!” He sings out this last part like a Huron war cry. “Scared the poop out of Pen.”

“Does he like her?” It’s the only question I can think of.

“He did, but not after that. He’s ok with it now though. ‘S*** under the bridge’ he says. ‘Things happen when you’re drunk.'” Maxwell shrugs, “I mean she’s cool and all, but what did he expect? The girl draws tattoos all over herself. She’s needy as hell.”

“So she’s not gay?” The question may finally be answered. It’s a shame, I kind of liked the mystery.

We pull into his duplex’s driveway, parking next to his neighbor’s vintage Mercedes. With it’s missing hubcaps and busted rear window it screams both affluence and poverty with one breath. You’d think it belonged to the President of Uganda at one time.

“Don’t tell your little girlfriends about the whole making out with Pen thing.” Maxwell says, cradling a bottle of Sprite like an infant, “And don’t tell Pen that I said she’s needy. I like my face the way it is, and I don’t need it rearranged.” He lifts his sleeve to reveal a half moon of tiny scabs just above his elbow. The look dark red against his farmers tan.

“Fingernails.” He rolls down his sleeve, “I don’t remember what the fight was about but I think she won it. She’s a damn spider monkey.”

We find June sprawled across Maxwell’s tattered couch, snoring, a dead iPhone laying on her massive belly. Pen, Brian and Grace are just as we left them, sitting Indian style around a scarred oak coffee table, Magic cards and empty cups spread before them.

“What took you so long?” Pen asks.

“Me and Mable made out in the parking lot before coming up.” He hands her a two litter, “She wants my body.”

“I’m sure.” Pen pours herself then Grace a warm cup of Sprite. Ice is not something I’m willing to flip the bill for.

“You’re move.” Brian growls. By the looks of things, he isn’t doing well.

“Manta Rider.” Grace, who hasn’t looked up since we entered, lays out a fearsome looking card. She moves her hand back slowly, eyes narrowed, her thin pink tongue pinched between small white teeth. “With flying and haste.” She doesn’t look at Brian. She doesn’t have too.

“F***!” Brian slams his cards down, sending them flying around the room. “F*** this!” He turns to Pen, something akin to hate in his eyes, “You said tonight would be easy!”

“It was easy.” Pen says, her laughter, I’m sure, carrying through the walls, “Easy for her!”

mable4879@gmail.com Contact me if you want to talk about anything.....?
View all posts by mable33 →
This entry was posted in American Angst: Journal, Home and tagged diary, family, friends, friendship, Journal, Personal, summer, teen, teenager. Bookmark the permalink.