All right everyone we are in a heat stress advisory so keep indoors or, if you really have to be out and about, drink your weight in water. Now here’s Soundgarden with their early 90’s hit, “Black Hole Sun.”

The tune creeps over the radio, opening with a sad guitar rift and steady drum beat. Before us, old Hwy 486 shimmers like a black river between baking fields of dry grass and wilting trees. The sun has gone supernova.

“Hey Mable, you know your sister was probably conceived to this.” Pen turns the radio up to jackhammer level then leans back in the passenger seat. Her right hand is out the window, gliding along the wind like a small pale bird.

“I don’t think my parents listened to Soundgarden.” I say, not really knowing anyone who listens to them, or even what genre they are. Heavy metal? Grunge? Post-Grunge? The Golden Oldies? Is that last one a genre or just a radio pitch?

“What do they listen too?” Pen asks. She studies the abandoned countryside as if it were a Van Gogh. Every farmer in the state seems to have taken the day off, with even their cattle crowding under the few trees they can find, too lazy to chew cud.

“Country maybe.” I look into the rearview at Grace and June. Even going sixty and with the windows open, they’re baking, the hot summer air working them over like a Ronco food dehydrator. “You two ok?”

They ignore me and shift uncomfortably in their seats. They’ve even stopped complaining. Isn’t that a sign of sever dehydration in teenagers?

“Just let me know if you two need anything.” I say.

June scowls at me in the mirror. She looks ridicules in her paper birthday hat, the words I’m 17!!! sprawled across it’s front in pink glitter as a tortured rubber band, pulled under her fat chin, holds it on top of her black curls. It’s a homemade happy from Grace. I refused to wear mine.

We round a small bend of trees and enter Jaxon County and are met with the stench of their number one export.

“Chickens!” Pen laughs as she spots the long rows of corrugated tin chicken houses lined from one end of an immense plain to the other. She pokes her head out the window, smiling as if the smell assulting our nostrils were Chanel #5 and not copious amounts of broiling bird guano. “I love chickens!”

“Well I don’t!” June yell’s. In the mirror I can see her pull her hat over her nose and mouth. She looks like one of those plague doctors, the ones who stuffed their masks with herbs to fight off the miasmas. I heard they died just as fast as everyone else. “Roll your windows up!”

Everyone ignores her. The smell is already swimming around us like a piranha in a goldfish bowl and raising the windows in my unairconditioned van would only provoke it.

“I’ll wear it at Olive Garden.” I lie, not feeling as bad as I should. But it’s my birthday, almost, and I shouldn’t have too. And what teenage girl makes crap like that anyways? There, I thought it!

“Bye chickens.” Pen waves as the last of the tin cook houses  gives way to a small partition of trees and then more cow fields. “Don’t go anywhere, we’ll be back.”

We cross the bridge over the Sangamon River (now a pathetic trickle bordered by heaps of sand) and will soon be in Brannon.

Olive Garden is June’s birthday gift from Grace and Pen. Mine was simply gas money, a full tank worth about thirty dollars. I hated to ask for it but I had to get out of the house. Mom and Dad have gone Cold War and stopped talking. Now, even from seventy miles away and over the roar of the radio and the wind, the silence in my home is deafening.

“So you two were born in June?” Pen asks. She’s been making a big deal of it, not realizing that its a three-hundred and sixty-five to one chance of simply being born on the same day. That’s excluding leap years, which I’m too lazy to do the math for.

“June 13th and 15th.” I say. The radio has switched to something warm and romantic, Maroon 5’s Sugar, and I’m swept up with thoughts of some boy loving me forever.

“It’s like you both were pooped out of the same twat.” Pen laughs. God, she never lets up does she?

“I’m the younger one.” June says with some pride, as if it were twenty years and not just two days separating us. “I’m sure you can tell.” She’s put the hat back on top of her head and makes a show of fluffing her hair and adjusting her bra.

We drive on, the lone travelers on a bypassed highway. Anyone with any sense takes I-20 to Brannon, and we’re left in the company of a solitary cloud that seems to have lost its way and has taken to us out of lonely necessity. 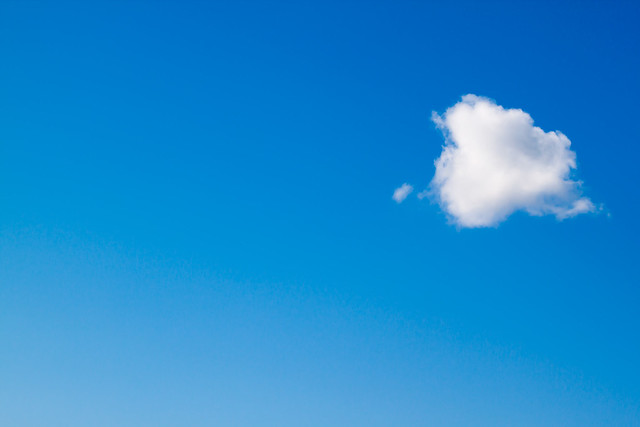 Its looks to me like a marshmallow, a ball of cotton, a dab of whip cream, or maybe its just a cloud.

“Look.” Pen points to a small dirt road winding up the middle of a hill. It ends at five marble crosses and a large concrete angle.

“That’s the cheerleader memorial.” I say. The dashboard clock says 12:33. We should be in Brannon by one o’clock for the lunch specials, and, if the money holds out, maybe a matinee. Inside Out is suppose to be good.

“Lets stop.” Pens already unbuckled her seatbelt and is slipping on her socks and Chuck Taylors.

“But we’re almost there.” Irritation creeps through me as I slow. Pen knows I can’t bare to have anyone unbuckled in the van, and she’ll begin crawling all over the place till I pull over. Why fight it? We don’t need a memorial too.

“I’m hungry.” June moans. She begins to pat her stomach as we pull off the road and roll through an open gate. Dust bellows up around us and the van rocks with every pot hole.

“It’ll just take a minute.” Pen already has her head out the window, and it’s a miracle her rabbit ears haven’t blown off, taking her head with them. She bolts before I place the van into park.

“Wait!” Grace yells. Curiosity has gotten the better of her and she pulls open the back sliding door and follows.

I step out of the van and over some faded silk flowers. The ground is littered with them, twisted into the dirt like empty popcorn bags at an old fairground.

“Put this on.” June walks past me, shoving my paper birthday cap into my hands. “Put it on.” She isn’t asking, she’s telling.

At the top of the hill Pen is frantic, skipping among the crosses like she were in the middle of a game of hopscotch. Grace is more reserved and reverent treating this mound of dirt in the middle of a cow field like the sacred place it is. “Margret Holmes,” She reads off of the crosses, “1977-1994-Beloved Sister and Daughter,” then turning to another, “Katie Pace, 1978-1994-Budded on Earth to Blossom in Heaven.” The others say pretty much the same things, each ending in 1994.

“So this is where that little road goes.” Pen laughs as if she just figured out the king’s riddle.

“Hwy 486 goes to Brannon or back to Greenville.” I correct. The sun beats down and I can feel my shirt beginning to soak through. Grace sees me wearing her birthday hat and smiles. Guilt is a hot coal.

“That road goes to Olive Garden.” June says, stepping indifferently on dozens of faded flowers before resting her fat butt on Margret’s cross.

“No it doesn’t.” Pen grabs a dozen roses from in front of Jenny Munn’s cross and tosses them into the air. They fall around us like deflated balloons. “It goes here, to these girls and then everywhere else.”

“These aren’t graves, its a memorial.” Grace says. She looks closely at the small oval portraits set in the centers of each cross. The girls look identical, pretty and with slightly teased hair, each wearing a blue and white cheerleader uniform, all smiling at the bright futures they have before them. Now they’ve been dead longer than they were alive.

“They’re here!” Pen yells. She begins to crawl onto the solemn angle’s pedestal. The extremes in weather have already begun to work it over, and small cracks have formed at the base of its wings. “They’re in the stones and the flowers…”

“They’re in a box in a graveyard somewhere.” Junes says. Her stomach rumbles and I know we should be on the move. She goes straight wolf-man when hunger hits her. “Están muertos a quién le importa?“

“They’re in Heaven with Jesus.” Grace whispers, speaking with a deep assurance I doubt a bulldozer could move. If asked she could probably go into the details, the streets of gold, the many mansions, all the dead relatives and pets she’ll meet again. Perhaps the drunk driver that killed these girls will be there. God is forgiving like that isn’t he?

“Err! Your both wrong!” Pen jumps down. The heats begun its work and her pale complexion has become a balmy pink. “They’re all around us, in the dirt and in the air, in our blood, in those stupid hats you’re wearing.” Her smile is warmer than the sun. “They’re in us and we’re in them.”

We only look at her, this strange child. Grace blames Pen’s ways on the Florida school system. They aren’t Bible Belt like us, she told me, it’s a state filled with liberals and hippies and Cubans. How can anyone think straight after years of that?

“We’re all apart of each other.” Pen reaffirms, desperate for some affirmation, pressing home a point that’s beyond any of us. She might as well be speaking Chinese.

“You’re about to be in my stomach if we don’t leave soon.” June says as she begins walking towards the van. She’s already told Pen what she thinks of her New Age beliefs. That was a rough afternoon. I think she was hungry then too.

mable4879@gmail.com Contact me if you want to talk about anything.....?
View all posts by mable33 →
This entry was posted in American Angst: Journal, Home and tagged Christianity, diary, family, friendship, Journal, New Age, Personal, road trip, summer, teen, teenager. Bookmark the permalink.