“I think its cool to grow fish.” Sunny says as he connects a dangerous number of electrical plugs into a cheap Walmart power strip, seemingly indifferent to the threat of fire, or, at the very least, a blown fuse. “June doesn’t think so, but I do.”

“You don’t grow fish.” Oliver laughs. He’s giddy as a teeny bopper at a Justin Bieber concert as he scopes fish pellets into the makeshift cinderblock pond. “You raise them, like cows or chickens.”

“Cows?” Sunny asks. He shuffles past me to flip on a small cluster of heat lamps. The effect is immediate. We could be on Coco Beach.

Out of a Walmart bag I hand him a pack of industrial grade ties, more fit for Guantanamo Bay prisoners than winterizing a science fair project.

“Pull the lights closer to the water.” Oliver points. Sunny complies, moving the lamps as close as possible without electrocuting himself.

“That’s good.” A sadistic grin comes over Oliver’s face as he scoops laundry detergent into the pond. “Day Twenty-Five of the experiment, one-fifth of a cup added. Making two cups of Shout! in total.”

He dictates more, mentioning the chemical composition of America’s favorite laundry detergent as Sunny takes notes in a worn yellow notebook. I’m sure the spelling errors will be horrendous.

The fish, small orange creatures oblivious to their peril, drift near the surface. Oliver first wanted to use tilapia, but Ms. Manny convinced him to go with some type of goldfish. Nobody will care if you killed them off, she’d said.

“Artificial eutrophication is major problem around the world.” Sunny’s voice seems distant, forced, the words spoken by an invisible vasntriloquest. “The addition of phosphates into water sources speeds up algae growth and kill off other organisms.” He turns to Oliver who nods his approval.

“Fertilizers are the biggest problem,” Sunny goes on, “but home detergents are also bad.” He picks up the notepad and flips to a hand drawn chart, giving phosphate levels and ph. balances.

I nod every so often, pretending to know what he’s talking about. Oliver takes the zip ties and begins securing loose flaps of plastic around the greenhouses wooden frame. The welcomed heat builds quickly, and Coco Beach soon becomes Death Valley, a little much but preferable to outside. The wind-chill today was to be in the 20’s.

Mom was ‘iffy about the entire project, especially with Oliver pairing up with Sunny. But after recent encouragement from their eight grade science teacher (the infamous Ms. Manny Manny Don’t Wear Panties) and talk of “such talented boys” representing West Greenville at the State Science Fair, she’s become enthusiastic, embracing her role as financer. The bag of zip ties and a few extra heat lamps are her latest contributions.

“What if they die?” I ask. One of the fish looks up at me with dim, uncomprehending eyes. Are humans God’s only creatures who anticipate death? Is that his gift to us?

“Ms. Manny said they probably won’t and that if they did,” he exaggerates a shrug, “this is a red state, there won’t be enough libs on the fair committee to give a darn.”

Give a darn? It sounds about as legit as water on Mercury.

“They’re just twenty-eight cent gold fish.” Sunny says dismissively, though I doubt he has a buck-fifty to his name. “If they die within thirty days, we can even return them and get the money back.”

He pulls out a handwritten receipt from the back notebook. Goldfish…..28 cents x 20. Morton County Co-op. 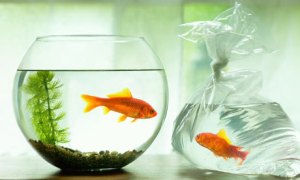 Yes, the grass is indeed greener.

“Who else is doing a project?” I ask. I don’t know much about science projects (the Reading Fair has always been my thing), but this whole artificial bad water thing does seem like a winner, dead goldfish aside. “Any other hopefuls?”

“Just a few people.” Oliver says. “Ms. Manny’s pretty tough. She’ll only let the best represent West Greenville at the county fair.” There’s a hint of pride in his voice, a dab self-assurance that shines like a new dime.

“Just a girl.” He turns and attempts to play it off, studying his notes, flipping through pages of Sunny’s scribbling, “Her project is on windmills.”

“She’s a girl he likes.” Sunny pushes it, grinning ear to ear. “They talk sometimes at lunch. He’s worked up the nerve to sit at her table.”

“Shut up.” Oliver growels. He turns and begins tugging on the zip ties, tightening any he finds loose and clipping off the excess with a pair of scissors.

I stare at him, giving a slow side-long glance as if observing some newly discovered species. Honestly, I never thought of Oliver liking girls. It just never occurred to me. Ham radio and tinkering seem to be his only interests, his only loves. The thought of him someday marrying and maybe procreating is utterly alien.

“Is she pretty?” I ask, my curiosity peaked. Timothy’s friendly emails, five of them now, weigh down my back pocket. If June learned I’ve taken to printing them out and carrying them with me everywhere I go, she’d laugh her butt off. And not polite giggles either, but hearty, hurtful bellows that leave you feeling abandoned. Why give her the chance?

“She’s real pretty.” Sunny breaths, as if recounting some fantasy of his own. “Short, blonde and has brown eyes.” He closes his own eyes, envisioning her. “She’s a good girl too. Not one of those others.”

“She doesn’t like you though.” Oliver snaps. He tosses a few fish pellets at Sunny who bats them away like flies. “You told her she was going to Hell. Idiot!”

“It wasn’t like that.” Sunny steps back a little. “We got to talking one day and she says she was Church of Christ. They believe you have to be baptized to be saved. Which isn’t true.”

“This idiot,” Oliver turns to me, disgusted. ” this idiot told her that she was going to Hell.”

“It wasn’t like that.” Sunny stammers. “I told her that I didn’t want her to go to Hell.”

“Yeah well maybe it is your turd breath that drives her away because whenever you’re around she doesn’t get near me. Why don’t you brush your teeth sometime!”

Sunny finds a corner and shrinks into it, pretending to review the notebook as Oliver begins collecting a water sample with a mason jar.

I think of Timothy and run my hand over my back pocket to make sure his letters are still there. I’ve told him about June. Just a few things, how smart she is, iron willed, the bridge over the Sangamon River with our names scratched in steel. He didn’t seem to notice, his last letter (a brief two paragraph message written in chicken scratch) only spoke of a failed college algabra exam.

After a few minutes Sunny mumbles something and leaves for home.

Oliver ignores him and nets a fish out of the pond and examines it closely under one of the lamps. Algae spots its body like the plague. “We’ll be better tomorrow.” he says, “This happens at least once a week.”

“I hope.” I say, playing the part of a good big sister, knowing that Sunny is as good for Oliver as June is for me. We need them. “He’s a good guy.”

“Yeah.” Oliver says. He tosses the fish back into the pond, sending tiny ripples along its surface. “Sometimes.”

mable4879@gmail.com Contact me if you want to talk about anything.....?
View all posts by mable33 →
This entry was posted in American Angst: Journal, Home and tagged diary, dysfunctional, family teenager disfunctional depression, friendship, God, June, love, teenager. Bookmark the permalink.