“God, it’s hot,” I exhale and attempt to breathe through my mouth, burning my lungs in the process. “I think I’m melting.”

“What?” Oliver asks. Before, with his heavy frame glasses and grandpa demeanor, all he needed was to be hard of hearing to top off the geriatric look. He’s now Walter Matthau, every bit fourteen going on seventy. “What was that?”

Just above out heads heat radiates off the metal siding roof, searing our hair and humming in our ears. Oliver’s opened the porthole windows at either end of the attic and placed fans to pull in the July air, but it doesn’t help. The fans’ fluttering ribbons only taunt us.

“Make sure it doesn’t touch the ground,” He tells me, being careful with his end of what looks like 25ft of steel cable. “Hang your side from the rafter above you, on the nail.”

Beads of sweat burn my eyes and run down my neck, soaking my shirt and bra. I find the nail through a blurry, stinging haze. “What is this thing again?”

“It’s going to be a shortwave antenna, a di-pole type.” Oliver pulls wire-cutters from his pocket and begins working on his end of cable. “And I’m not talking to anyone yet, not as far away as this can get me.”

I can smell us, perspiration mixed with the sweet, piney scent of car air fresheners. Mom’s hung dozens from the rafters, always adding a few every time she dares to come up. These two have birthed an impossible odor that’s sure will follow me like a stray dog for a few days. “How far out have you gotten?” I can tastes us too. Breathing though my mouth may not have been the best idea.

Oliver points to a large sheet of cork board nailed to the sloping roof above his workbench. Pinned to it is a rainbow of small colored slips.

“Call cards,” he says. “the farthest one is from Oregon.”

I look more closely. There are dozens of them, these ‘call cards,’ each personalized with different colors and cartoons: KJJ58 Cleveland TN is a red hound dog; K88MR New Port OR a pelican, KJH09 Jerome FL a black and white pirate flag.

A stack of Oliver’s own cards, KP787, carefully written in sweeping black calligraphy, sits on the workbench beside a soldering gun and several old vacuum tubes. A vintage radio, the current centerpiece of Oliver’s world, rests behind everything. It looms large as a mountain, it’s knobs and dials almost forming a Gomer Pyle grin, all white teeth and large, loving eyes. They say that old computers-the oldest ones that ran off punch cards and the meticulous natures of their programmers-could fill rooms. I wonder how huge old radios could get.

“Where’d you get the new one?” I ask. The radio’s grin seems to widen; it loves being the center of attention.

“The army surplus place in Brannon.” Oliver looks up, his own grin showing a heavy Jerry Lewis overbite. “Mom brought me last Saturday. I’d been saving up forever. The last one was just a 2 meter; this is way nicer. It’s a little old but, you know.” 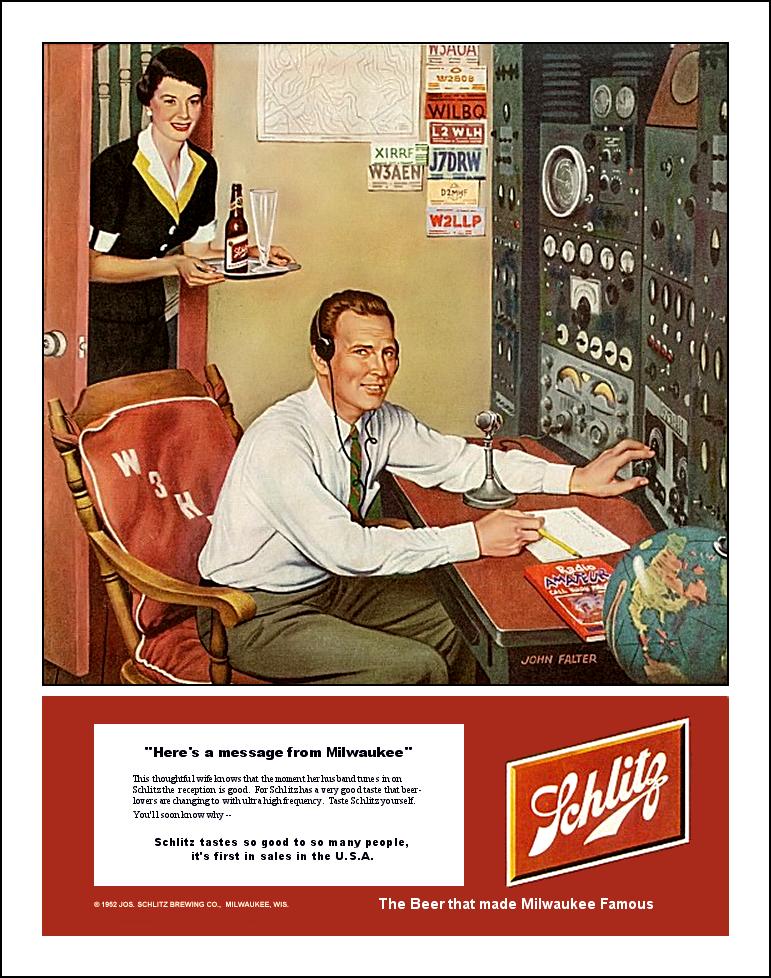 Ham radio? Hot girl? A Schlitz is just icing on the cake.

I watch him under the dim glow of the attic’s only light bulb. He has the look of a hipster (minus the hip part) with his Buddy Holly glasses containing thick coke bottle lenses, and his plaid shirt tucked tight into his blue jeans. His carrot red hair (a mutual curse we’ve both inherited from Dad) is slick with gel and parted to one side. June calls him Opie and for more than the obvious reasons. Oliver was born five decades too late. He was meant to enjoy hardware that didn’t run on apps but good old electricity. In postwar suburbia he would’ve been able to find others like himself, those destined to design and launch the Saturn V rockets and the Mercury space capsules.

“Maybe you can show me a few things?” I say, my enthusiasm as fake as a million dollar bill. I can’t for the life of me get into this stuff. In 1955 America I’d spent my afternoons reading Nancy Drew and listening to Ritchie Valens on an AM radio. “You know, ham radio things.”

“It looks neat.” God, we’ve become our own after-school special! And to think that Mrs. Jane put me up to this. After Mom’s nagging, Opie has already seen her once. She hoped to get him out of his shell and out of the attic, but all he did was talk Mrs. Jane’s ear off about the wonders of Morse code.

He just needs a friend, Jane said. Maybe. But who doesn’t need a friend?

“Where’d you learn to make the antenna?” I ask.

“YouTube.” Oliver checks his watch, an ancient Timex with a replacement wristband, and moves to the desk. He flips on a large red switch. Static fills the air, and he quickly lowers the volume and spins the tuner. The static clears away to several gruff voices. “Listen. That’s Billy and Greg playing chess. They play chess every Tuesday afternoon.” He stands and begins working on my end of the antenna. “Its fun to listen to them jabber on.”

And we do listen: numbers and letters called out, a pawn taken and a king checked. The occasional smirk crosses Oliver’s face at some inside joke.

“Who do you talk too?” I move to one of the portholes, leveling my face with the fan, leaving just an inch or two between its flickering ribbons and my nose. “You have all those cards?”

“I talk just enough to get a card, then only listen. They forget I’m even here.” My brother, the auditory voyeur, moves back to his desk and turns on the soldering gun. Sweat drips down his forehead onto his round, flushed cheeks. He smiles. “You can come up here again if you want. Just be sure to ask first, ok?”

Greg H. moves a bishop and takes a knight. Oliver, his back too me, is lost in his work. I lean forward and let the ribbons touch my nose once, then twice. The sun has already set, but the humid, twilight air is still too warm to give anyone any relief.

mable4879@gmail.com Contact me if you want to talk about anything.....?
View all posts by mable33 →
This entry was posted in American Angst: Journal, Home and tagged diary, Diary teenager radio ya, June Bug, Oliver, teen. Bookmark the permalink.