I’m miles into the stratosphere, alone, freezing, and about to plummet into the ice cold Atlantic…

Ok, maybe it’s not that dramatic, but standing on the 20 meter high dive above Greenville’s only municipal pool as dozens of red, chlorinated eyes stare up at me, it sure feels that way.

“You going to jump?” From behind, a thin, almost hairless boy pokes me. “Or do I have to push you?”

Honestly, I can deal with a little acrophobia and (being chunky) I’ve learned to ignore stares, but there’s something else, something that makes me feel like I’m naked and alone in the Gobi desert, a castaway and camida para los lobos. That’s food for the wolves in case you didn’t know. 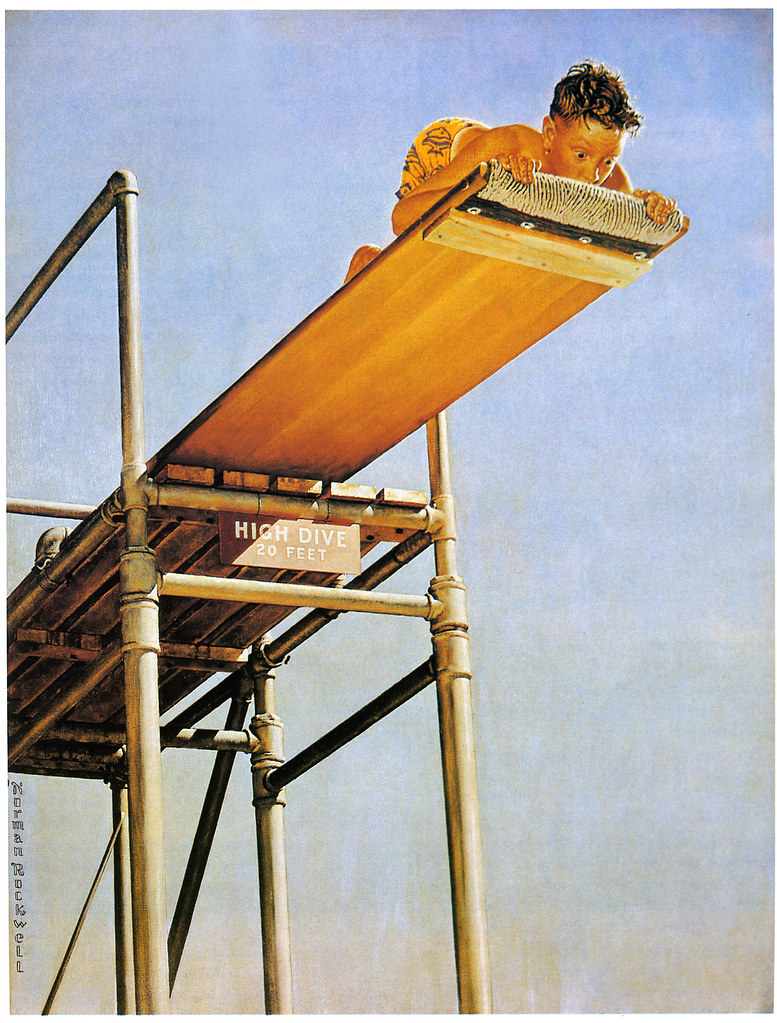 You know the feeling?

Beneath us, Dad, appearing clownlike in his lucky red trucks and with all his pale areas smeared white with SPF 110 sunscreen, naps by the snack bar. Across the pool, Mom lounges under a patio umbrella, flipping through a Women’s World as Oliver, fully clothed in khakis and a green polo, sits beside her, his nose buried in a tech manual. Morgan stands behind the pump shack, frenching some shirtless buff with a bulge in his shorts. I don’t think they even knew each other before thirty minutes ago. Slut.

Ironic isn’t it? Dad called this ‘family time,’ droning about it on the drive over, even throwing in a few Bible verses and saying how he and Mom arranged everything weeks in advance. Mom just gave affirming nods, attempting to be supportive. She was already perusing a Good Housekeeping.

“A family that plays together stays together.” These were dad’s final words, spoken almost as an afterthought as we pulled our towels out of the Caravan’s trunk. Maybe. Perhaps we’ll know someday.

I feel Prick’s thin fingers push me to the edge of the diving board. Beneath me are pink toes and a turquoise ocean. My rainbow one piece (which Dad calls the ‘f*g flag’) is still dripping from trial runs on the 10 meter. My fat rear and thighs are carefully hidden beneath baggy pink trunks.

If June were here, I’d tackled her already, and we’d both have tumbled down into the deep end together. Friends do for friends and friends make you brave, or at least a little less afraid. But she’d said it’d take a fistful of roopies and a wheel barrel to get her through the pool gates. Solo los blancos permitidos, comprenda? Only whites allowed at the city pool. Does she really think this is 1955? No. I have a sneaking suspicion that she can’t swim. Maybe, being pumpkin shaped, she can bob a while, but never swim. b a bit but never swim.

I step to the edge, carefully, my toes dangling. Below, the Nolan family-my family-is blissfully unaware.

“Are you watching?” I ask Prick.

“Everyone’s watching.” He replies in a voice I could almost love. Maybe he isn’t such a punk after all.

If you’re wondering, free falling 20 meters takes just long enough to ask yourself, Shouldn’t I have hit by now? before you’re swallowed feet first by an enormous thirty-thousand-gallon beast, blue and tasting of chemicals.

When I reach the surface, I hear Prick’s voice, clear as a cymbal. “Yeah, Fat Butt! Great job!” His clapping, sharp and lonely, echoes across the pool.

I can’t help but smile.

mable4879@gmail.com Contact me if you want to talk about anything.....?
View all posts by mable33 →
This entry was posted in American Angst: Journal, Home and tagged Bug, diary, June, summer, swimming, teen. Bookmark the permalink.